Produced in part by Samuel Roggers & Associates and Beaver Production

Four years passed between 1983’s embarrassing Electric Universe and their reunion album, Touch the World. Before the album’s release, there was excitement as well as skepticism among Earth, Wind & Fire fans. Was EWF still capable of delivering a great album? And even if it was, how well would the album do in an R&B market that was radically different than that of the

1970s? As it turned out, a lot of the old magic was still there, and Maurice White and Philip Bailey proved that they could still be a powerful combination. From “Evil Roy” (which describes an urban youth’s life of crime) to the major hit “System of Survival,” Touch the World proved that EWF was still quite capable of excellence.

Though White doesn’t shy away from technology, he uses it in an organic fashion and remains faithful to the outfit’s rich history. Despite “System of Survival”‘s success, the album wasn’t the huge commercial hit it deserved to be, but it wasn’t a bomb either. ~ 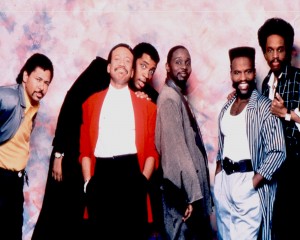 This entry was posted in Promotions. Bookmark the permalink.